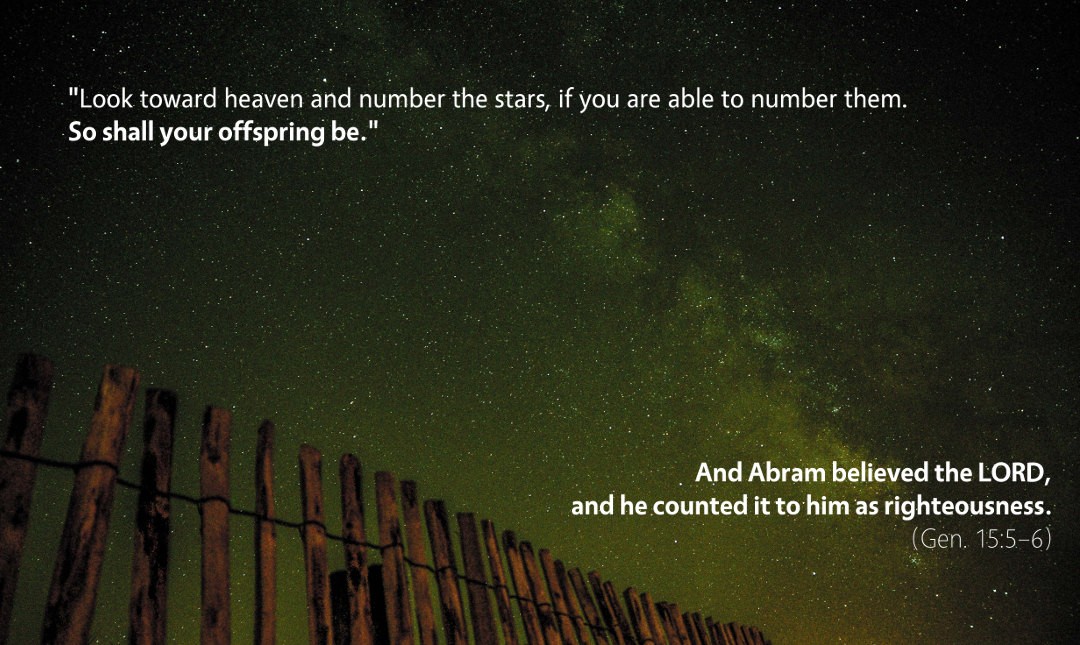 It is not surprising that we should find Abram so frustrated when Yahweh seems to have failed to keep his promise. Even a great man of faith like Abram struggles with the same kind of doubts that plague you and me. So, in Genesis 15:1, Yahweh comes to reassure Abram of his promises.

In response, we read that Abram “believed the LORD, and he counted it to him as righteousness” (Gen. 15:6). Abram is not saved by any great deed he performs but merely because he believes what Yahweh promises to him. And because Abram believes, Yahweh counts his faith to him as righteousness. Theologians call this imputation: God freely imputes (credits) righteousness to his people through faith.

It should comfort us, then, that the Scriptures record for us that a man with genuine faith like Abram nevertheless has real doubts. Right after we read that Abram believes Yahweh, we hear him asking for Yahweh to confirm his promises to him: “O Lord Yahweh, how am I to know that I shall possess [the land]?” (Gen. 15:8).

Graciously, Yahweh tells Abram to bring him several animals. Abram obeys, cutting their carcasses in half and laying their bodies next to each other. This strange scene would have been very familiar to someone living in the ancient world. When kings formed alliances with each other, they would cut animals in half, letting their blood pool in a small valley between the pieces. Then, each king would take a turn walking through the pooled blood, swearing that “If I should break the terms of our covenant, may I be broken like these animals.” This practice is described in more detail in Jeremiah 34:18–20.

So, Yahweh is doing this to swear a covenant with Abram in order to assure Abram of his promises. But oddly, we never read here that Abram passes through the pieces. Instead, we only read that a smoking fire pot and a flaming torch—both of which represent Yahweh himself—passed through the pieces (Gen. 15:17).

When you and I struggle to believe God, it may be helpful to remember that he already has kept his promises. At the cross, Yahweh himself in the person of Jesus Christ was broken to uphold his covenantal promises. Specifically, the body of Jesus Christ was broken so that God could impute Jesus’ righteousness to us who believe in him for salvation.

So when we doubt, let’s ask ourselves this: If Yahweh did not spare his own Son but freely gave him up for us all, what would he possibly withhold from us (Rom. 8:32)?