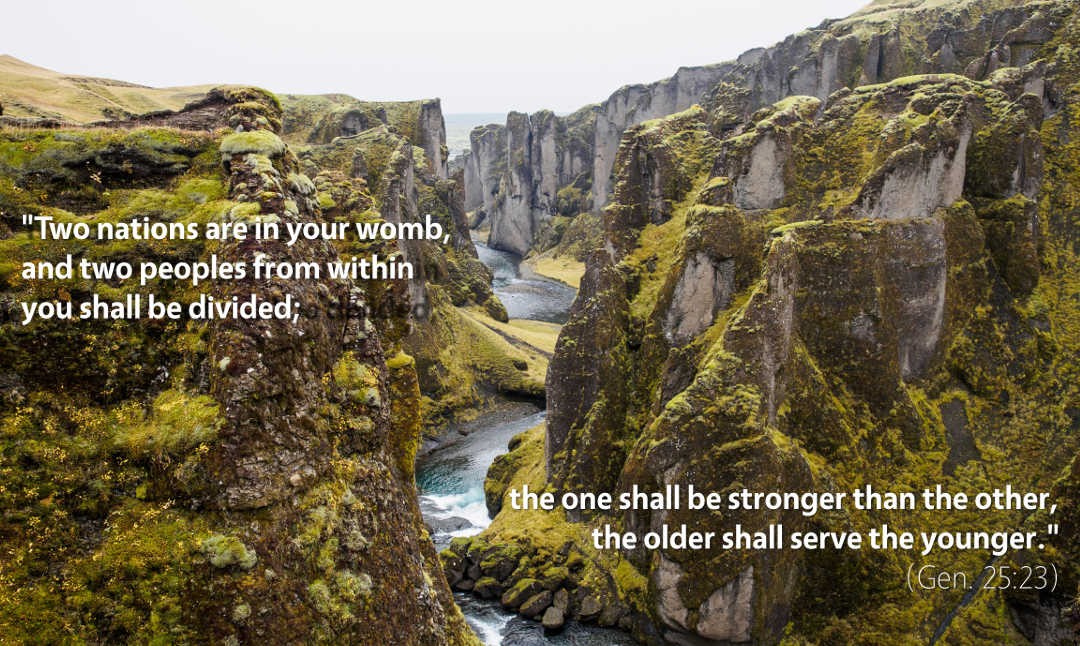 Genesis 25 is a chapter of extreme transition in the unfolding story of God’s salvation in and through his people. In this chapter, we see God’s purposes in election across three generations.

First, we read in Genesis 25 about the death of Abraham at the age of 175. Abraham outlived his wife Sarah, even taking another wife named Keturah who bore him many children. Nevertheless, we read that “Abraham gave all he had to Isaac” (Gen. 25:5) because Abraham never forgot that God had named Isaac as the one through whom his covenantal promises would be fulfilled.

Second, we learn more about Isaac’s story, and specifically about his relationship with Rebekah. Just as Isaac’s mother, Sarah, had been barren, so also Rebekah is barren (Gen. 25:21), and Isaac had to pray that God would open Rebekah’s womb. We discussed the ongoing theme throughout the Scriptures of barren women in our meditation for Genesis 16—Rebekah was not the first infertile woman in the Bible, and she would not be the last. God delights in demonstrating his great love toward—and power through—helpless people.

Third, Genesis 25 stretches us into the third generation, telling the story of how Rebekah did eventually conceive. In fact, Rebekah conceived twins who struggled fiercely in her womb. But from the very beginning Yahweh had chosen that the “older [Esau] shall serve the younger [Jacob]” (Gen. 25:23).

Jacob and Esau share many similarities to the children of the previous generation, Ishmael and Isaac. Both sets of brothers find themselves in fierce opposition even from birth, and in both sets of brothers Yahweh singles out one son through whom his covenant promises will run. Earlier Yahweh had told Abraham that “through Isaac shall your offspring be named” (Gen. 21:12), and now Yahweh tells Rebekah that Esau shall serve Jacob (Gen. 25:23).

The Apostle Paul points to those two verses (Gen. 21:12, 25:23) in Romans 9:6–13 to explain God’s purposes in election. It wasn’t that Ishmael or Esau had done something wrong, or that Isaac and Jacob had done something right—in fact, Paul insists that God’s purposes of election were accomplished specifically before these children were born, and before any of them had done anything good or bad.

Instead, God’s purposes were to bring forth the offspring that he had promised who would crush the head of the serpent (Gen. 3:15), and so God chose specific people with whom he established his covenant, and through whom he would raise up that offspring. As Paul writes, “So then it depends not on human will or exertion, but on God, who has mercy” (Rom. 9:16).

Does your theology place a greater emphasis on what you do to receive God’s salvation or on what the God who has mercy has done before you were even born, before you had done anything good or bad?